This just in, Firefox is vulnerable to all variants of the Poison Ivy Trojan/Virus and most importantly Norton is apparently worthless as a defense.

What to look for: two or more firefox.exe running in your processes, your firewall being reset to "off", the error message XPCOM:EventReciever showing up and requiring a manual cancel to shut off your machine, cursor control lost and being run by remote control.

This question is coming from reading the “Dobson Offers Insight on 2008 Republican Hopefuls” article in US News. James Dobson has had a very influential career and is respected by millions. I understand why people look up to him and I am on occasion a listener to his radio show. What I don’t get is where he gets the audacity to judge another man’s, who he is arguably not acquainted with, faith.

"We use that word—Christian—to refer to people who are evangelical Christians," Schneeberger added. "Dr. Dobson wasn't expressing a personal opinion about his reaction to a Thompson candidacy; he was trying to 'read the tea leaves' about such a possibility."

Ignoring, for the moment, the fact that a Focus on the Family spokesperson is openly stating that his boss engages in occult practices to see the future, so what? What I don’t understand is this fascination with the catch word “evangelical”. I have absolutely no idea what the word means or denotes in terms of faith or practice. I doubt that those claiming to be one, do either.

What does it mean to be an “evangelical” Christian? I know some of you claim this and I’d like to hear what you mean by it, even if you don’t use the word the same way as someone else might.

We can get some wind here, from time to time. Today at work it was blowing in gusts up to 62 mph. I saw something I hadn't seen before. A red-tail hawk was hunting and had grabbed a rabbit and was flying off. (I've seen that part before). He got about 12 feet off the ground and was having a hard time with a kicking bunny and strong cross winds. The bunny started rocking side to side in the wind and the hawk dropped him. The rabbit hit the ground running and made it to his hole before the rapter knew what happened. For the next 15 min the bird kept coming back and searching the area for his lunch that got away.

Farmer Tom’s book review got me to thinking on this. Blame him.

Mutually exclusive positions are ones that can’t both be true at the same time. A mutually exclusive choice is one that once you’ve made it you can’t back out and change your mind, once done its done. As simplistic as that sounds lots of folks have a hard time accepting it, or living their life according to its ramifications.

Sexual fulfillment is one of those mutually exclusive choices. One person can’t enjoy both the Puritanical (i.e. Biblical) view and the Playboy view. I’m assuming the Puritan view to mean one mate for life and the Playboy view to mean extensive sampling of many partners and lots of causal variety. Unfortunately some folks want to blend the two points of view and thus miss out on enjoying either one of them fully.

Here’s what I mean. Each of these approaches to sexuality has its benefits. You can enjoy the exclusive sharing/romance/intimacy of the Puritanical approach or you can have the adventuresome variety of the Playboy. Why anyone would want to split the difference is beyond me. In trying to have it both ways you end up with something less than the ideal form of either approach.

I realize that most do try to have it both ways, either by starting Playboy and moving to Puritan or sometimes the other way around. I think that only leads to disappointment. Pick the point of view that’s most likely to give fulfillment and stick with it, trying to have it both ways is like having your cake and eating it too.

Food, It's Fun to Wear 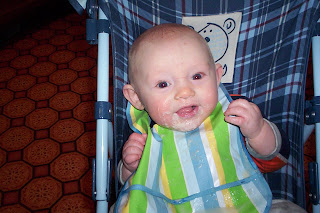 Here he is, Mr. Wonderful, enjoying a game of put the food in the mouth, then spit it out again. He does actually get some of it in him from time to time. In addition to the old stand by, he's up to cereal, applesauce and as of tonight bananas. I never knew how much I'd enjoy being a dad.
Posted by Res Ipsa at 3/20/2007 09:48:00 PM No comments:

The people formerly known as my parents have left after a weeklong visit. The purpose of their trip was supposedly to wish me a happy birthday and spend some time together.

Last Sunday evening they showed up in town and met us at church for worship. After briefly saying hello, they proceeded to snub everyone at church that tried to talk to them and rushed out the door as fast as humanly possible. Once back at my house they engaged in some brief conversation with the wife. I should say one of them, and only one of them, at a time tried to talk with the wife. The parental unit not holding my son would talk to the wife in an effort to distract her and keep mom away from the kid. That way the other parental unit could make baby faces and goofy noises at their grandbaby. So it went all week. One would distract mommy and the other would get to hold the baby. Only when cries of hunger or the dreaded poopy diaper started would the grandchild be returned to the milk lady for a brief servicing.

Such is the behavior of grandparents.

Mrs. Ipsa made a comment to my father, that she wished I hadn’t been so busy with work so I could have visited with him more. I’m not sure he knew who she was talking about.

One other bit of information came out this week. My sister sent a wrapped package that was only to be opened with all of us together. Inside was a zip lock baggy with a picture of an oven drawn on it and a miniature loaf (some might call it a bun) of bread inside.

For several years I’ve been seeing a specialist for a joint problem I have. The practice is run slightly different than most. It’s an all cash deal. You write a check for the visit. You get the bill and pass it on for reimbursement from your insurance company.

The only exception to the rule is for Medicare patients. Being a rheumatologist most of the practice is old people and not accepting Medicare would cut into business.

When I started seeing this doc 5 years ago, the rates just went up to $65 a visit. Not too bad for a specialist considering my family doc was charging $95 a pop. Follow along here, the specialist was $30 cheaper than the GP. The doc was very open about the billing and that by having patents pay cash there wasn’t a need for an extra person to handle billing. So the doc was making as much profit wanted at $65 and was paying a receptionist $15/ hour.

Medicare called. Apparently if a doctor doesn’t charge as much as other doctors in the region for services, Medicare assumes that their expenses are lower and cuts the percentage of the bill that they will reimburse. That’s right folks if your doctor charges you less than the other doctor, the government will take away money.

The solution is to keep raising your rates. How do you know how much to raise them? Tough call on this one. If doctors talk among themselves and set a standard rate its price fixing and illegal. Fortuity the government hires someone to ensure doctors don’t price fix and everyone gets a “fair” price.

Last fall my doctor got a call form Medicare, who told him to raise his rates, “or else”. So he did, effective Jan 1 the basic visit went up $10. The result? Not good enough. Medicare called again. Rates needed to be with in such and such a percentage of other doctors in the region. Then they told him to the penny what that rate had to be if he wanted Medicare reimbursement.

So that’s what he charges, to the penny.

Tell me again whose fault sky-high medical costs are and how the government can fix it for us.