Two hikers making their way through bear country come around a corner to spot their worst fear: a grizzly. Without pausing a fraction of a second, one of the hikers takes off running, prompting the bear to charge. Forced into action, the second hiker turns and sprints after the first. “What were you thinking?” he shouts. “You’re not supposed to run in a situation like this. You can’t outrun a bear!” “I don’t have to outrun the bear,” his friend shouts back over his shoulder. “I just have to outrun you.”


A dad coming back to his campsite for sunscreen while the rest of his family plays at the lake notices a van pulling up into a neighboring empty site. As soon as the engine dies, the doors fly open and four children of varying ages burst out and fly into a frenzy of activity. Their parents follow quickly behind them, with the mom and dad unloading gear as the kids rake the area, set up the tent, and arrange the fire pit. Amazed at their efficiency, the dad with the sunscreen walks over and watches for a moment more before commenting to his fellow father, “I’ve never seen a family work so well together—or so fast.” “Yeah,” the other dad says while unrolling a sleeping bag. “We live a few hours away, and our policy is that nobody gets to go to the bathroom after the drive until the camp us set up.”


Where do park rangers go to get away from it all? 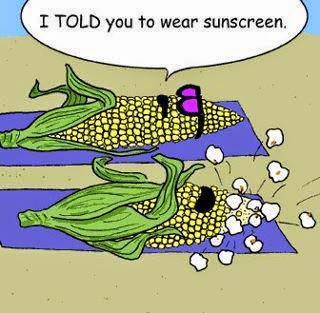 I wasn't sure what to make of Trump when he was a candidate.  To me Trump seems crass, loud and every bit a New Yorker.  Those characteristics rub me the wrong way.  That was when he was one candidate among many.  Frankly I didn't like anyone the Republicans were running.  It seemed as if the Republican establishment was in the bag for Clinton.  Still does.

The election came down to obnoxious verses evil.  That was a no brainier.  Of the two choices, Trump was clearly not as bad for the country humanity.

At election time I found myself saying two things about Trump:
Trump was the only person saying things we all know about the country being in trouble.  The. Only. One. Anyplace.  When the media shut him out, he used Twitter.  When they reported on what horrible or stupid thing he tweeted, most normal Americans saw it and said, "SO FREEKING WHAT!".

Trump's not polished.  Neither is most of America.  Trump said what he thought.  If it came out sounding a little crass, at least it was genuine.  Media Whores who were using the news to campaign for Hillary pretended Trump's faux pas  were a big deal.  They said people were offended. Joe Six Pack didn't care.  Know why?  His B.S. detector didn't go off every time Trump opened his pie hole.

Can you say that about the Lizard Queen?

Trump, in some locker room setting, where he thought he was in private, with a bunch of guys, said something about if you are rich enough and famous enough that women don't mind if you grab their pussy.

I never got what the problem was.  What's the big deal?  If you have lots of money and/or are otherwise famous/popular/desirable in some way to some faction of the female population, chances are, pussy is coming your way.  Is anybody on planet earth surprised by this?  What if Trump framed it the other way?  "Hey guys if you're fat, bald, broke, you ain't gonna be banging many supper models".

CNN should have reported, "Trump claims the sky is blue".

What was weird about that whole deal was some guy was running tape on other guys in a locker room.  What kind of whack job does that?

What's he gonna do now that he has the big chair?  I don't know.  It's been a mixed bag so far.  Now, do I blame him for that?  Nope.  Every time I turn around the Republicans are stabbing the Donald in the back.

Take Obama Care.  How many times did the house Republicans pass legislation overturning it when Obama was in the White House?  Yet these same clowns can't dust off an old copy of the same law and send it up to Trump.

How many of those things will he get done?  I don't know.

What I do know is Trump is doing more to move the country towards doing the right things than anyone since Ronaldus Maximus.  Another thing I know, Hillary Clinton isn't the President of the United States.
That fact alone is worth the price of admission to the Trump years.