I was thinking up a political post, but I changed my mind. There is a much wiser person than I that has earned his right to be heard. It's high time I get some Archie Bunker back in this blog.


If you'll permit me one more. Affirmative Action has proved to be a bad idea in 1976 with teachers and its proving to be an even worse idea in 2011 with presidents.

Barrack Insane Obama is the only person who could make Jimmy Carter look like an intellectual giant AND an economic genius. No wonder the democrats love him. Just saying. Has it occurred to anyone else that if abortion was legal in the US in the 1950's we would have never been stuck with this situation today? You'd think that B.O. would be the most pro-life president of all time. Since it would be highly unlikely that an upper middle class, under age, white girl would have given birth to a half-black bastard. Considering that B.O.'s father made one of his other hoe's have an abortion you'd think B.O. would be grateful for his adopted country's prohibition on the procedure.

Obama, wrong about the economy, wrong about "natural born citizen", wrong about the number of states in the United States, wrong about energy policy, wrong about social policy.  No matter how you dress it up, B.O. stinks.  Go ahead and tell me how evil  person I am for not swooning like a media whore over Obummer.  Call me a racist even though I once voted for Keys. Feel free to use the comments to support the American stench that is B.O.  While you're at it, all in favor of Obama raise your right hand. 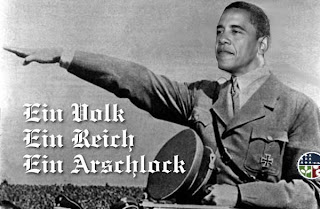 Socialism and the Christian

Today I had to take a  road trip.  Coming back I was composing a post in my head. The post was about economics and a Christian world view.  I was so deeply in thought that I failed to see the Pennington County Sheriffs deputy until I made him chase me about ten miles with his lights on. Apparently its illegal to drive 80 miles an hour in South Dakota.  That's the bad news.  The good news is that in South Dakota they seem to think that people from Wyoming are too dumb to read.  The correct answer to "why can't you people from Wyoming read the speed limit sign?", is "well sir only about 2/3 of our elected officials can read and it ain't my turn to be mayor yet".  The good news is that I was able to remember to get my seat belt on about point two seconds before he got to my door and he decided to let me go with a warning as long as I promised to keep the seat belt on.

Giraffe and Professor Hale have got me to thinking.  Shooting, more importantly accurate shooting isn't hard.  I think its time to dispel some myths about the shooting sports.  First off, anyone with a good gun, good ammo, normal dexterity and a desire to shoot well, can.  The first thing to keep in mind is what do you mean when you say "good shooting".  When I used to shoot trap and sporting clays, good shooting meant that I was breaking above 95% of the clays I shot at, no matter what distance I was shooting.  Keep in mind that in those sports a long shot was 27 yards with a 12 gauge shot gun.  In handgun shooting, IPSC or IDPA type events any hit in the "A" ring is a good hit.  The goal is to hit all the targets in the shooting scenario.  Basically all you have to do is resolve your targets and execute a firing solution, a "group" of 6 inches is considered good and the distances are normally less than 25 yards.  Bench-rest shooting is about shooting real small holes at various distances.  The mythical "Bug Hole" is what we strive for.  A Bug Hole is all the bullets in one hole.  To prove you did it, they run a "backer target" to verify that you did in fact put either 5 or 10 shots on the paper.

The type of event you are shooting determines what makes a "good" shot.  Most of the time "good shooting" means hitting a 6 in area at various distances.  Bench-rest shooting is when you go for the magical bug hole.  Nobody expects a shooter to run an IPSC course and shoot double taps into the same hole while making time.  Its not impossible, but its very unlikely.

As for me,  I'm a hobbyist. I've never been in any branch of the service.  I'm not a cop.  The only person responsible for my shooting interests and ability (or lack thereof)  is me.  Sometimes I get lucky and manage to beat other shooters.  Mostly though I care about making my personal goals happen.  While I like to win, my goals normally center around doing something better than I have before.  If I succeed I'm happy.  For those of you that might think that sounds like some happy horse stuff, its not.  Last year I took over coaching and spotting for a guy that was my competitor.  I did that because his spotter wasn't able to see his hits and call correction.  I got the kid on paper and helped him call the wind to keep his groups tight.  He beat me out of first place by one shot.  No one else was even close to us.  Had I kept my big mouth shut I would have won another 1st.

My goal this year is to do all my own prep and shoot with all my own equipment and ammo.  If I win anything or even place I'm going to be thrilled.  If I ever shoot anything note worthy in an non sanctioned match I might go for a "real" match where there is a possibility of some recognition.  Until then I'm content to use a pistol to do what most guys don't think they can do with a rifle.  I'm not special, anyone who has the interest and even average ability can do what I do. Maybe I should start a "Road to Sundance" series.
Posted by Res Ipsa at 6/06/2011 09:58:00 PM No comments: