Where Are the Wapiti?

Yes I'm back. No I didn't get an elk. I was hunting bulls and all I saw were cows. I did get 3 good stalks in heavy timber but no horns came my way. I still have my tag and there is a little time left to hunt in this season, but I don't know if I'll get away. I did get to help in a search and resuce operation when a hunter got lost and was forced to spend the night on the mountian. He made it back ok. I'm working over at my regular job to make up for an employee thats off, and I'm feverishly trying to finish up consulting work before the grandparents show up for a visit latter in the week.
Posted by Res Ipsa at 10/23/2007 11:20:00 PM No comments:

Snow on the Mountain

Its fall. The nights are cooler, the days shorter and I hear the call of the wild.
I'm heading up in elevation in search of the mighty wapiti. I expect to return sometime around the 21st.
Posted by Res Ipsa at 10/11/2007 11:04:00 PM No comments:

Beginning in 1865 the Republican Party had nearly 100% of the black vote in this country. With the exception of some post war votes that went to Democratic candidates, they keep that minority constituency until the early to mid 1960’s. After all who else would blacks vote for? Certainly not the party that fought a war to keep them enslaved, right? Right?

Not right. The democrats discovered that the American Negro liked two things better than his freedom. Welfare checks and entitlement spending. Oh sure democrats eventually got on the Equal Rights bandwagon, but when they did they made sure the blacks knew that the money would stop if the votes ever did.

You didn’t think the Democrats came up with the civil rights movement did you? They didn’t, it was a Republican led initiative. The War on Poverty and the Great Society weren’t programs to improve equality; they were and are programs to buy votes. The same holds true on other issues like the environment. This was a Republican strong hold until the 1960’s too. Ever hear of a guy by the name of Teddy Roosevelt, if you like national parks and large stretches of public land, thank him.

The point is that the Republicans have lost nearly every political constituency that they have ever held in the name of expediency and neglect. “We can always count on the black vote”, they reasoned, “Who else will they vote for?” The Republican Party held the “liberal” view on almost every “progressive” issue since about 1872 until the late 1950's. They also represented the desires of the business community and used the public treasury to fund the interests of their supporters, ala railroads and Tea Pot Dome.

GWB and the NeoCom’s, (Com isn’t a misprint, it’s a more descriptive and accurate term than the “Neocon” label) thought that they could buy off the constituency that brought them to power the same way Republicans always have, by tossing a few crumbs from the pubic treasury. That’s why so many “faith based” initiatives received federal funding. GWB got his votes and the Christians got some cash. In the republican mind the debt was paid.

As the battle for the cherry blossom throne begins to heat up, the Republican Party leadership is looking to reign in its base. They need everyone to rally round the GOP banner once more. There’s a problem. The NeoCom’s have betrayed everyone except those who bought their line about the war being the single most important issue.

The Christians are threatening via James Dobson to take their votes start their own party. Does this scare the Republican leadership into making changes in the platform or running more conservative candidates? Nope. Instead they are using the Lizard Queen as a scare tactic. “A vote for us is better than her!”

Unless we manage to get Ron Paul on the ticket, I think Christian groups should vote for someone else. Some will say that such a policy will elect Hilary. They’re probably right. But they’re not offering anything that is significantly different. I see two possible outcomes from such a strategy, both good. One, (unlikely) we could end up with a decent third party. Two, Republican Neo-communists might wake up to the fact that the evangelical Christian voting block ain’t their nigger no more. As long as the party leadership can say “boy come vote for me, or else you’ll get someone even worse” and then beat us up after, nothing will change.

This last summer has been hectic. I can't believe its over. It seems like yesterday was January. I didn't accomplish half the things I planned. I did manage one home improvement project, new garage doors. For the first time in my life I can park inside with the luxury of an automatic door opener. In the past the wife got the garage or the side with the opener. Its as good as fart'n through silk.

I didn't get in a single garden post, mostly because the garden didn't get much attention. As of today I still haven't weed whipped the yard, although I did manage to mow it a few times. Blogging has been slow, I've read more than I've posted here or at everybody else's. In the past I worked at my desk on my network. I could work on budget projections and take a break visiting around or post something of my own. Now I'm in the field 90% of the time and even when I'm at a PC its on a managed network. Blogging at work is strictly verboten. So I've written many a post in my head but never gotten it down for ya'll.

Work is keeping me busy, everyone at big oil company loves my work, yet no promotion into a professional position. My boss told me that they don't want to lose me in my current job. He said I'm too good at what I do. Big freaking deal. I got into this in hopes of moving up after a year not in hopes of being a field hand for life.

In my long list of things not accomplished, my hobbies have suffered this year. Its hunting season and the 06 isn't even sighted in. Worse I don't even have a box of ammo loaded for it. In one week I'm supposed to head out in search of the mighty wapiti.
What exactly have I been doing with my time? 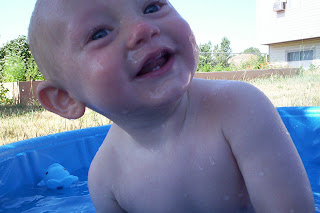 Here's one of the little guy eating (wearing) his birthday pie. He likes fruit so he got a blueberry pie. He's one and a lot of fun. 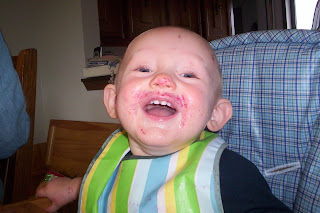 The first picture was taken over the summer. You can see how many new teeth he got in just a few months. I wonder if that has anything to do with mom and dad feeling tired most mornings.

The in-laws came for the birthday. When the wife was at work grandma watched the boy for the whole day. I get home before the wife. I walked in the door and a little blond headed boy came crawling at top speed across the kitchen. He went right over top of the landing (a first, he doesn't like going down steps). When he reached me I was taking off the work boots. He reached up with both hands, and with a hopeful looks said "daaaaaaaaaaa". Which as every father of a one year old knows means, "Welcome home father, please pick me up and save me from these two crazy old people that have been harassing me all day". This was the first time the boy came to me when I got home. Of course I needed to go out and buy new jeans. I now stand 10 feet tall.

If you stop by and I've not posted anything about politics, the news or my hobbies, know this. I have a second job now. My responsibilities include: the tickle fight (Mostly I win); a game called airborne baby (some lucky baby gets to transform into a real live F-16); blow bubbles on the belly is a blast, sometimes we get to laughing so hard that I never actually get to make the blubbbbberb sound; Baby drop (I don't really drop him, at least not too far, and I always catch him); today we added race to the top of the stairs, (I lost but tomorrow we're going best 2 out of 3). Like my real job, I'm hoping for a promotion soon, horsey rides are in the near future.
Posted by Res Ipsa at 10/03/2007 08:46:00 PM No comments:

As migration approached, two elderly vultures doubted they could make the trip south, so they decided to go by airplane.

When they checked their baggage, the attendant noticed that they were carrying two dead raccoons. "Do you wish to check the raccoons through as luggage?" she asked.