As if I needed another reason to hate all things about California.

Marines Denied Permission To Film Commercial on the streets of

California is one of the biggest beneficiaries of military pork in the United States. You'd think they'd let the Marines at least use their city for a commercial. And I don't buy the mayors excuse about traffic, when its gays doing a "love in" the city doesn't give a good gosh darn about the traffic. How about we cut out all of Sodom on Pacific's federal tax funds and CA's pork and see how they feel about the military then?

This is what the Marines wanted to do and film:

I was reading the comments at 's and Eric suggested a self defense scenario in which an attacker was 15 feet away. His concern was with the amount of time a person (the attacker) could cover the distance in question.

This is a 3 person drill.

1 man sized silhouette paper/cardboard target set up 25 feet away from and directly in front of the shooter.

The shooter assumes the “ready position” (i.e. gun loaded and holstered) on the firing line. The second person assumes a standing position directly behind (not touching) the shooter and facing away from him, i.e. back to back. This person is the runner. The runner should be holding a set of keys or other object such as a mag. The timer/R.O. sounds the start timer. Two things should happen immediately. The shooters job is to draw and fire two shots into the target. The runners job is to run away from the shooter. At the sound of the first shot, the runner should drop the keys/mag. At the sound of the second shot the runner must stop immediately.

See how far the runner gets before he drops the keys and then see how far he gets before the second shot. If you're the shooter ask yourself, "how accurate were my shots and how far did the attacker get?" After you've run it a few times and everyone has gotten the chance to practice their parts and try different roles, consider how your new information will impact your self defense plans/options. The first time I ran this drill it was a real eyeopener. Its a fun exercise if you've got a newbie or liberal in your group too. 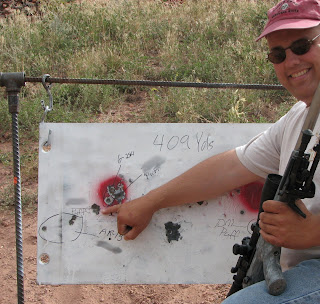 Well not quite a quarter mile, more like 409 measured yards. Regardless, my pursuit of the 2K goal is progressing. The best group with the AR came in at 2/3 of an inch from the bench. Wind gusts got up to 16 mph, but we had some decent calms and it did work its way around to our backs. I tried something new today, I shot a hand gun long range and managed to get within 2 inches of my point of aim at over 400 yards. I forgot to take my digital camera, but one of the other guys did, if he emails me some pics I’ll post them.

I smudged out shooter names on the target since I wasn't the only shooter. The shots labeled "6-284" are from a handgun chambered for a 284 necked down to 6mm. The shots labeled "puff" are from a handgun in 7mm Dakota. (which is what I'm holding in the pic) The group labeled AR-15 were shot by a friend using my AR. The wind was kicking up a bit on that first shot so it was about 3in from the other two. Even with that, the group is sub MOA at 400 yards. The AR shots were made using the ballistic reticle on a Burris 3X9 Full Field scope. Proving that decent glass can get the job done at reasonable distances.

400 yard shooting is interesting. You pull the trigger, feel the recoil and blast, see the impact on target and then hear the sound of the bullet smacking the steel plate.

My buddies brought their boys on this outing, so shorty after I took a break from shooting, my AR and about 200 rounds of ammo were commandeered by some 13 year olds. I got the gun back after they shot up all the factory ammo they could find in my truck. One of the boys had never shot a center fire rifle before. Inside of his first 5 round mag, he was tagging targets and putting up sub MOA groups from prone. Both of the boys kicked some major butt on the range with my gun. I should mention that they were shooting with some Wal Mart factory ammo with 55 grain hollow points. I had brought some hand loads that I wanted to try out (75 grain A-max's behind 24.5 grains of TAC) those came in much better giving me a even closer group.
Posted by Res Ipsa at 9/03/2007 06:50:00 PM No comments: