To those living and dead who:

Served in peacetime,
Served this country in a popular war,
Served in an unpopular war,
Carried a gun, drove a tank, sailed a ship, few a plane,
Sat behind a desk,
Pushed papers, or pushed a broom,
Did the job asked whether common or heroic.

Regardless if you:
Were wounded and bled,
Made it into Arlington,
Made it home,
Whereabouts still unknown.

You have allowed me to:
Hold a good job,
Provide for my family,
Live in peace,
Enjoy time with those I love,
Play with my little boy,
Work in the yard,
Grill out,
Enjoy the benefits of freedom you purchased.

down a bone crushing, gut wrenching, muscle straining, class V stream, whitewater rafting is but a paddle or die dream.

It's that time of year again. Its the 3rd annual Whitewater Rendezvous in Colorado at the Château Waterboy. Here's the plan:

Saturday June 17th we'll head up on the Arkansas River and run THE GAUNTLET. Should we get enough people for the trip we'll try to get the group discount. We'll need at least 12 rafting to get the price break. The survivors (if any) will head back to the Château for dinner and drinks as we watch the sun set over Pikes Peak.

The menu: We are considering a USDA grade "Prime" corn fattened (just for you Farmer Tom) Wyoming black Angus, prime rib roast for dinner with all the trimmings. Res's Great Northern will be available for dessert.

Possible deviations from this plan are possible: such as adding a day of rafting, or having dinner out if the crowd is too large for Waterboy's place. Post comments, concerns or suggestions in the comments and email to confirm that your interested. We can offer some help in the area of hotels or picking you up from the Denver airport if you're flying in for the weekend. We'll figure out arrangements for getting everyone to the outfitters once we know how many we need to accommodate.
Posted by Res Ipsa at 5/24/2007 08:23:00 PM No comments:

Draw Play - What many children do with the bulletin during worship.

Halftime - The period between Sunday school and worship when many choose to leave.

Benchwarmer - Those who do not sing, pray, work, or do anything but sit.

Backfield-in-Motion - Making a trip to the back (restroom or water fountain) during the service.

Staying in the Pocket - What happens to a lot of money that should be given to the Lord's work.

Two-minute Warning - The point at which you realize the sermon is almost over and begin to gather up your children and belongings.

Instant Replay - The preacher loses his notes and falls back on last week's illustrations.

Sudden Death - What happens to the attention span of the congregation if the preacher goes "overtime."

Trap - You're called on to pray and are asleep.

End Run - Getting out of church quick, without speaking to any guest or fellow member.

Flex Defense - The ability to allow absolutely nothing said during the sermon to affect your life.

Halfback Option - The decision of 50% of the congregation not to return for the evening service.

I have no way of knowing if this story is true or not. I've read it several times. As we get closer to Memorial Day, I think its appropriate to run it, true or not.

A nurse took the tired, anxious serviceman to the bedside. "Your son is here," she said to the old man.

She had to repeat the words several times before the patient's eyes opened. Heavily sedated because of the pain of his heart attack, he dimly saw the young uniformed Marine standing outside the oxygen tent. He reached out his hand. The Marine wrapped his toughened fingers around the old man's limp ones, squeezing a message of love and encouragement. The nurse brought a chair so that the Marine could sit beside the bed. All through the night, the young Marine sat there in the poorly lighted ward, holding the old man's hand and offering him words of love and strength.

Occasionally, the nurse suggested that the Marine move away and rest awhile. He refused. Whenever the nurse came into the ward, the Marine was oblivious of her and of the night noises of the hospital - the clanking of the oxygen tank, the laughter of the night staff members exchanging greetings, the cries and moans of the other patients. Now and then, she heard him say a few gentle words. The dying man said nothing, only held tightly to his son all through the night.

Along towards dawn, the old man died. The Marine released the now lifeless hand he had been holding and went to tell the nurse. While she did what she had to do, he waited. Finally, she returned. She started to offer words of sympathy, but the Marine interrupted her.

The nurse was startled, "He was your father," she answered.

"Then why didn't you say something when I took you to him?"

"I knew right away there had been a mistake, but I also knew he needed his son, and his son just wasn't here. When I realized that he was too sick to tell whether or not I was his son, knowing how much he needed me, I stayed."

Ya'll may remember the 300 WSM by Savage Arms that I bought on Nate's advice, and the performance issues I had with it. As last reported I sent it back to savage with a nasty note. They worked on it and sent it back with a proof target, showing a 3 shot group with 1 MOA. They also included a note saying their target was shot with 150 grain Winchester ammo. Well the weather got nice and I went to see if I could duplicate their target. 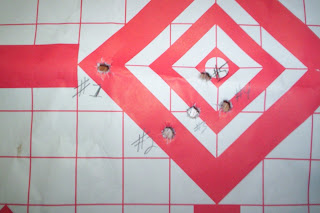 According to Savage they shoot a 5 shot group and 3 of those shots will measure 1in at 100 yards. To their credit that is what I was able to do as well. Shots #3, #4 and #5 are 1 MOA. What I didn't care for even a little bit was shot #1 which was from a totally cold barrel. Granted at 100 yards it still produces a dead elk, or antelope for that matter, but at 200 yards it would be 4in off and at 300 yards 6in (or more as wind age becomes a bigger factor) off. Granted this is a major improvement over last years target.

What Savage did was replace the barrel, rework the magazine and replace the scope and mounts as well was some other fitting work. In the end they made it right and fixed the gun so that it would do what they claimed it would. Nate was vindicated in his claims about Savage being a decent gun for a low price. Every gun manufacture produces a stinker once in awhile and I happened to buy it. They did fix the problem and the gun works as advertised.

Now that I have a working Winchester Short Mag, I'm going to play around with handloads and see if I can fine tune it a bit more. What I've found so far is that the WSM family of ammo is overrated.

First, the idea behind a mag is the fact that you can throw a heavier bullet faster. With the 300 WSM you need to stick to bullets under 180 grains (it likes a high BC 150 grn) to achieve good accuracy. With a standard 300 mag 180's and 200's aren't generally a problem, not so with my WSM. Second, recoil is supposed to be reduced in the WSM line. It is of course but only marginally. Third, I thought the ammo was going to be cheaper, its not. I bought a box of lower end 150 grains to test fire the riffle (duplicating Savage Arms test) and it set me back more than $40! Thats $2 a shot. It wasn't long ago that I was firing 50 BMG AP and tracer rounds for that kind of dough. Forth, if I have to cut speed back down below 3,000 fps and use 150 grain boat-tails to maximize accuracy on this gun, what you have is the ballistic equivalent of a souped up 30-06. Hardly a major improvement in the field of hunting firearms.
Posted by Res Ipsa at 5/07/2007 12:19:00 PM No comments:

In Wyoming certain hunting license are issued in a draw. You pay the state the entire fee and they put your name in a hat and draw licenses, if your name gets drawn they send you the license, if not they send you a refund check and you get one preference point towards next years drawing. Today I got a check. I'm bummed. At least I'll have one more years worth of points towards a moose and big horn sheep.
Posted by Res Ipsa at 5/07/2007 12:05:00 PM No comments:

Sicker Than a Dog

Your host has had the worst case of the flu (lets hope) for the last several days. I've been going to work and crashing into bed as soon as I get home. For a guy who almost never gets sick this has been a tough week. I seem to be getting better and today I almost feel human. I might even go hunting this weekend.
Posted by Res Ipsa at 5/04/2007 07:54:00 AM No comments: