It is a universally accepted fact that there are certain topics of conversation that one does not bring up in polite society.   There once was three, Politics, Religion and Sex.  People talk about sex a lot more these days, and its getting harder to tell if your in polite society. Like the seven words you can't say on television (pre 1990 and cable) you NEVER talk about the big three.  It's just bad manners.

During the annual elk pilgrimage I made a couple of trips down the mountain to soak in Saratoga's hot springs.  One one of these trips an older couple showed up to take an afternoon dip.  Since we were the only people in the pool at the time we struck up a conversation.  Which soon lead to politics.  (Not my doing). Now I've learned (it might have took awhile) that I'm not a good political conversationalist.  I'm a fairly good political debater i.e. argumentative type, etc., but not a good conversationalist.  So for the sake of my blood pressure and because my wife/family/friends tend to look at me like I'm a ranting lunatic after almost every debate/conversation I have, I've learned a few techniques that help me get along when dealing with the insane/liberal/hippie/haterofAmerica/communistnutjob types that one occasionally meets.

Technique number one.  Find some point, no matter how small, (sometimes its very small) that I can agree with that they have made, and acknowledge/feign/fake some sort of common ground or agreement with the insane liberal.
Technique number two.  If they actually made an intelligent or rational comment, of any sort what-so-ever agree that it is a legitimate point and change the topic to anything not politics.
Technique number three.  If either technique #1 or #2 has been even slightly successful in averting my derision and sarcasm, and there is no possible way to politely get the topic changed; I change the topic to something that they will likely know nothing about or dislike so that they will let the whole thing drop.

Now about 95% of the time the three points above work wonders for me and allow me to keep some semblance of decorum while I preserve a degree of personal integrity where my philosophy/politics/religion are concerned.  My basic technique can be summed up as, avoid conversations with liberals in the first place, fake agreement on some small point, polity change the topic, change the topic at any cost. Like I said normally this works out pretty well for me.  I avoid stupid conversations that only irritate me. The problem comes when a political conversation starts out looking like I agree with the person on the substance and conclusions that they have.

I think we've all been there, you meet some, they seem OK and then something gets said that make you think, "hey these are my kind of people".  Maybe you like the same sports team, or whatever and you think, "they might be OK".  I get that way with politics.  If someone gives me a little clue into their thinking, I tend to let my guard down a little.  After all, there is no reason to avoid a topic if we basically agree.

So there I am, in my swim shorts and this older couple drops in the pool.  "How's the water?" he asks.  I said, "it's great, not quite as hot as the other day".  We chit chat a bit.  Live around here? Yep. You? Nope, passing through.  Just basic stuff, safe stuff, everyday conversation with someone you don't know, just met and aren't going to see again.  Without any warning politics rears its ugly head.  "So what do you do for a living?" she asked.  Seems like an innocent question.  We answered.  There's a problem though, when someone asks what you do, its just natural to ask them the same thing back.  In my defense I was expecting, a normal answer, something along the lines of, "I'm retired".  What I got was a dissertation on the evils of illegal immigration and how it was killing jobs in the valley.   Come to think of it he never did say what he did for a living, owned a business I think.

Anyway, he hates illegal immigration, is complaining about it.  Seems OK to me.  Illegals do push wages down.  He might be intelligent.  Seems like we actually agree on this, and with the exception of the Hole most of the state is conservative.  So I venture an amicable, "Yep, illegals are helping wreck our economy".  "Nothing wrong with our economy" he retorted.  From there it went down hill fast. I tried to shut up equally fast.  As someone who has actually read an economics text book, or two, I've learned that there is a forth topic no one wants to talk about, economics.  It's boring and almost no one understands it beyond, "me got job, good" and "buy stuff cheep, good".   This guy had a third "economic" concept he held to, "republicans bad, democrats good".

I'm now at the "change topic at any cost" option.  I go for hunting.  Major fail.  They are bunny hugging tree humpers. This has gone from bad to worse and the turd is circling the bowl. I'm considering the nuclear option.  Instead, I grab a towel and call it a day. Hippies, no matter how clean you are, still make you feel dirty just being around them.
Posted by Res Ipsa at 10/31/2011 12:36:00 PM No comments:

For your viewing pleasure, pictures from elk camp. 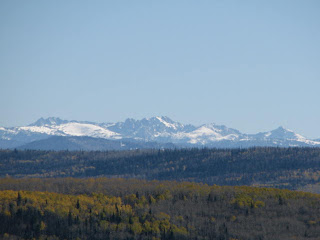 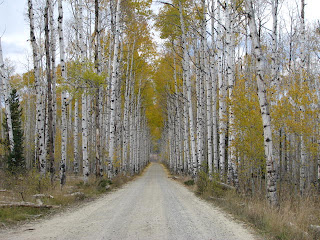 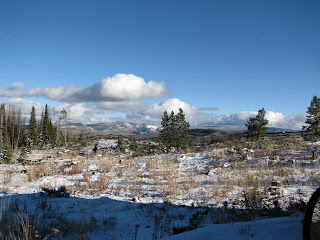 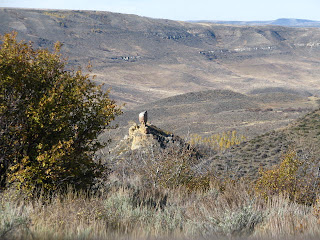 It was a beautiful trip.  The weather was very nice and the snow only lasted a day.  Which meant that the elk stayed up at higher elevations.  I did mange to see some cows and one bull elk that ran by me in heavy timber, but I didn't get a chance to shoot one.  As far as other wildlife, I did get to see some moose, deer and I think a bear.  I say think because we had one or two near our camp that other folks saw.  One dark morning I went out to find a tree and I might have chased him out of the area.  The next day I was glassing a shelf and did see two dark creatures moving around a meadow.  It was too far to make out what they were for sure.   So again this year, I'm not cluttering up the blog with pictures of dead elk.  However I did manage to kill a couple of antelope on Saturday.  One buck and one doe, both of which are hanging in the garage awaiting my butcher knife.

We did have a couple of other adventures, on the way into Saratoga to soak in the hot springs we had this little adventure as we tried to cross the continental divide. 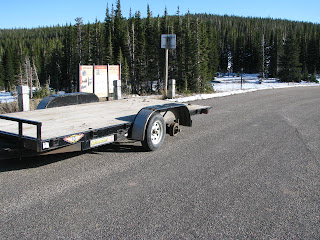 This put us behind schedule for the Hot Springs and dinner.  Which turned out OK since there was a number of young female athletes taking an afternoon soak when we finally did show up.  Elk camp, its not just about shooting elk, drinking beer, eating chilly or telling lies around a campfire; its also about the scenery and enjoying nature.
Posted by Res Ipsa at 10/24/2011 11:19:00 AM No comments:

Its That Time Again

I found this on the net and since I posted about this story I thought I'd give a link to the David Letterman interview with Sgt Myer, USMC MOH.  Grease'n the bob cat must mean something different in Indiana than Kentucky.
Posted by Res Ipsa at 10/12/2011 11:06:00 PM No comments:

Ok I'm a little late in the day posting this, but hey I posted something so at least you know I'm still alive.


Random Acts of Thinking
I want to become a vegetarian, but I'm not sure I can quit eating meat cold turkey.

I wear glasses. Doesn't that mean that *everything* I see is
an optical illusion?

I paid my psychiatrist with a reality check.

Do fishermen live in the reel world?

I may not be a great artist, but I am really good at drawing
a blank.

My wife and I love each other. I rub her back and she
massages my ego.

When he who lives in a glass house invites he who is without sin for dinner, bad things can happen.

You can't stop progress, but you can unplug a good chunk of
it.

A chrysanthemum by any other name ... would be easier to
spell.

Some days the best thing about my job is that the chair
spins.

My life no longer needs an extreme makeover. Now it just
needs a complete do over.

A friend of mine has a nose ring. She keeps the volume
pretty low, though, and sets it to "vibrate" at the movies.

I'm not too handy with tools. I once got my finger caught in
a screwdriver.