White Water Rendezvous Rafters: This is it. Waterboy is making the final arrangements and reservations for the rafting trip. If you are going, he needs a final head count and a firm commitment ASAP. Either email him or my self right way if you are planing on going.

We have a large group going this year. Its going to be a lot of fun.

I need help with a practical joke.

I'm looking for someone who can receive and then re-mail a letter, from a zip code with in the state of Texas, preferably Austin. The idea being, that this letter needs to look like, at least as much as possible, it came from the state capital.

Details are available if you are able to help. Please post in the comments or email.

A special thanks to our servicemen and women, past and present. You are remembered and appreciated. Today I'm taking a minute to think back on the stories that I've heard form different vets over the years and remember them. Those still with us are getting a thank you call. Those of you who stop by here are in my thoughts as well.

Difster thanks for your service in the Marines.

Waterboy thanks for your many years with the USAF.

Roci, thanks for your past service and for this most recent re-up in the Army. I hope your mission to find the best buffet in Baghdad is a successful one.

If you're a regular and I've forgotten, or didn't know you were in the service please pipe in, in the comments.

Fire Flys Come Out in the Spring

Girl Friend Fire Fly sent me her condolences on not drawing moose or bighorn sheep tags. She also sent me this picture. 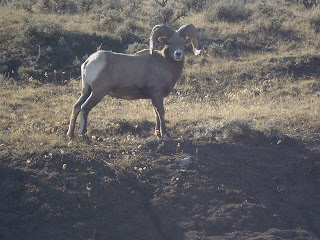 Her sister took this picture at work. I didn't think sheep roamed as far east in her neck of the woods, but I may be mistaken as to which neck of the woods that is. GFFF also said that this was "a small one". In my book he'd still be a shooter, since one curl is at least 3/4, the right side being the longer horn IMO. In WY only one horn must go at least 3/4 to be legal, I'm fairly sure that both of this guys do.

We do the full day Royal Gorge trip with Buffalo Joe's on Saturday with newbies and any experienced riders who also wish to go. This trip starts off on Class III water before breaking for lunch; the break will give newbies a chance to evaluate the experience before deciding whether or not to continue with the rest of the trip, which goes into Class IV rapids. Then we do Clear Creek Advanced with AVA half day trip on Sunday for the experienced riders, maybe even doing both morning and afternoon sessions if there's enough interest.
Doing them in this order will give the newbies a chance to get their feet wet (ha!) before deciding whether they want to tackle something harder right away. And we can always flip the days around if need be, though I wouldn't advise newbies going on the harder trip first.

Some basic info: The dates are June 21st and 22nd, and the prices are on the web sites. If everyone who has tentatively said they are coming comes, we might have enough people for the group discount. The way this works is we have to reserve the trip(s) in advance. This means someone (Waterboy or myself) has to put it on a credit card. I think it was last year, some said they were coming and did a no show, leaving WB stuck paying the bill. So, if your coming and you haven't come before, I need your contact info. My email is resispa@vcn.com, there is a link on the side bar as well.

My thoughts: I've rafted Colorado several times. I like it lot. The Royal Gorge is a good trip with some fun rapids. If you're new to rafting, you'll enjoy the trip. After each set of rapids there is a stretch of calm water where you get a little break in the action to rest up. The paddling isn't very hard and they feed you lunch. This is a very good first timer trip.

Clear Creek is a new run for our group this year. At least I don't remember if we've run it together. It looks like fun. If you're in half way ok physical shape and you enjoy a thrill, this should be a fun run. You have to paddle a bit more than the Gorge. We've gone with AVA several times. The guides are very professional, and even if your new to rafting, you will have fun on this run. You will get wet, it doesn't matter what seat you have in the boat. If you're wanting to "try it out" on the Gorge and then see on Clear Creek, let us know, if you're sure you want to do both, and you do want to do both, let us know that too.

I really thought that this would be the year for the moose.

Much Ado About Outcomes

Vox is resurrecting the "why women are unhappy with the modern man" topic again. Interestingly hes got the Sam Harris thing going today as well. Seems to me that depending on your view point the current state of affairs is either: 1.) a result of mankind revolting against God ordained gender roles i.e. old fashioned sin, or 2.) the product of generations of women selectively choosing which males would father their children, thus producing the most evolutionary, biologically, and intellectually advanced male specimens that we have today.

Either way I can't see what all the ruckus is about.

In the 1970's women were dissatisfied with the way the society of the 1950's worked. They wanted change. Men largely gave them what they wanted. Now 30 some years latter they are unhappy about the changes. They blame the men. Maybe they are right. Had our great grandfathers been wiser they never would have given up the franchise, and we wouldn't be listening to all the whining now.

I wonder what they were thinking. Actually I know. They thought they'd get more sex. Thats how it works. Men will do just about anything for sex. We will be perfect gentlemen. We will refrain from any number of "bad" (in the minds of the female) habits and engage in any number of "good" activities if we think it will get us laid. Heck some men will even pledge themselves to a lifetime of monogamy and faithfulness if that one special women will bed us. Of course the game is much more subtle than this, but thats how it works.

What would happen if we didn't have to be gentlemen to get what we need? What would it be like if the girls played like the boys? Thats basically what we have now. Women told themselves and us, that they were just like men. Men believed them. A womens sexuality was once a sacred expression of who she was. A man was expected to cherish and love her for giving that to him. Now a women's sexuality is reduced to what she has, pussy. Pussy is a modern day commodity. Every women has one and they are nearly all equally accessible.

Don't complain if the consumer is buying what the marketing department is selling. If "used as advertised" isn't what you want, don't sell it that way.
Posted by Res Ipsa at 5/05/2008 10:33:00 AM No comments:

This is the story about how I tried to buy drugs and nearly got shot by the cops.

I needed to get a prescription filled. So I loaded up the dogs in the back of the truck and headed to town before the pharmacy closed. Due to a mix up with the insurance, I spent a ton of time trying to get the right policy info so I could buy my drugs. Meanwhile another customer pulled up outside with dogs in their truck. My dogs jumped out and went to visit their dogs, scratching the crap out of their truck in the process.

Now a normal person would have asked me to pay for the damages. This one called the cops. By the time they got around to showing up I had locked my dogs inside the truck. I finished up not getting things fixed with the insurance company, after all its Friday, its 6 o'clock and screw the customer we'll look into it Monday.

Anyway dogs scratching a paint job requires a cop and extra back up. Cop #1 seemed cool. He listened to the other persons story and then explained that, 1. no crime had happened, 2. their was nothing he could do, and the best thing was to get it fixed and send me the bill. He asked if I was willing to pay the damages, which of course I am, because it was my stupid dogs that scratched the ever loving crap out of the other truck. At that point we swapped phone numbers and agreed that we'd figure it out next week when the local body shop opens.

During the exchange cop #2 took up a hostile position flanking my left, hand on gun and did the "fake jump" thing about three times. Apparently this is deemed a helpful deescalation technique, as is direct eye contact and constantly squeezing the grip on the Glock and flipping the retaining strap off the gun. Keep in mind that all of this occurred AFTER he had opportunity to observe that everyone involved was peacefully working out the details of getting the truck fixed.

Emotionally most people get a little charged up over things like this. I was less than happy about it. As was the other party. Everyone was civil, polite and agreeable and peaceful, except the kid who hasn't started shaving regularly and apparently is in possession of a gun and a badge. I have no objection to the gun, but somehow having a badge converts the owners into half crazed gunslingers looking for an opportunity to shoot someone. I know several cops that don't fit this description but more and more often I'm reading about or encountering stories about those who do. I've had a few occasions, one in Central America, where I thought it was possible I'd be shot. Tonight I got the impression that this kid was eager for his first kill and it mattered not whom he pulled the trigger on, or the reason for it.
Posted by Res Ipsa at 5/02/2008 07:04:00 PM No comments: