The mission — using small craft to reach the deck of German-owned vessel as the crew huddled in a safe room below — ranks among the most dramatic high seas confrontations with pirates by the task force created to protect shipping lanes off lawless Somalia.
The crew managed to kill the engines before taking refuge in an panic room-style chamber, leaving the ship adrift and the pirates so frustrated they started damaging equipment after hijacking the vessel Wednesday, Navy officials and the ship's operator say.
Lt. John Fage, a spokesman at the U.S. Fifth Fleet headquarters in Bahrain, described the pre-dawn raid as an "air and sea" assault that included Cobra attack helicopters for surveillance and coordination.
Marine Corps officers involved in the raid told reporters in a conference call that the attack involved "overwhelming force" and the element of surprise. Marines were able to separate the pirates and confront them singly or in small groups, while helicopters bore down.
The armed pirates gave up quickly when faced with large numbers of Marines carrying heavier weaponry.

The rest of the story here.

A couple of thoughts.
1. Marines are not commandos.  They are Marines.  They are bigger and badder than "commandos".
2. "The armed pirates gave up quickly when faced with large numbers of Marines carrying heavier weaponry." Giving up quickly is a smart move when confronted by the USMC.  What is the heavy weaponry?  The Marines are boarding a ship, I doubt they brought tanks or field pieces.  This is evidence that Fox News is filled with know nothing pinko democrat nut cases that don't have a clue about the armed forces.  Sure they aren't as bad as NBC ITAR-TASS.
3. The USMC has been the preferred and most effective method of dealing with middle east pirates since 1805. See Pic 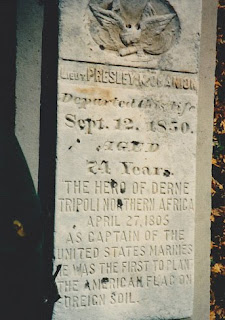 I've never thought of myself as stuck up. If anything I think I'm the opposite.  Funny how we delude ourselves sometimes.  I really do care, apparently a great deal more than I would have thought, about social status.  I find myself in a job, that allows me to tread water till I get a better job.  My boss is a friend and knew that I needed some kind of income in the worst way.  There was an opening, and I was offered the job.

Its a job that requires me to wear a name tag, and serve the public.  I haven't had a job that required a name tag since I was 19.  I hate the name tag.  Not that I'm ashamed of my name, I just would rather not wear it.  Its a requirement, and I like being among the 65% of Americans with a job rather than the 35% without one.

I serve the public.  I wear the tag.  Except yesterday I took it off.  One of our senators came in to do business with us.  I knew he was coming and I was the only person available to take care of him.  I've met him before.  We've worked on projects together when I was actively consulting.  I didn't want him to remember me, because frankly I'd like to be working on those kinds of projects and doing that kind of work more than wearing a name tag.

I waited on him.  We made small talk.  I didn't take the bait when he asked me about politics. I did and said nothing in hope he wouldn't remember me.  He looked at me like he recognized me but he couldn't remember from where.  Then he left.  A few minutes latter he came back in because he forgot something.  I took care of it for him.  He thanked me using my full name.  He remembered me, but was enough of a gentleman not to ask any questions.

I'm really not ashamed of doing honest work.  Even when the pay is low.  Its better than not working at all.  After 3 full years of under employment and having a baby, my savings is almost tapped.  Frankly I haven't done a government contract since 2003.  Apparently I miss playing a big shot.
Posted by Res Ipsa at 9/08/2010 11:15:00 PM No comments:

What if Biblical characters could be recruited as product endorsers?

For Match.com - Noah: "We can find a mate for anything. Why not you?"
For Excedrin - Moses: "Take two tablets and call me in the morning."
For Dell - Adam and Eve: "No Apples for us. We learned the hard way."
For AARP - Methuselah: "Life begins at 960!"