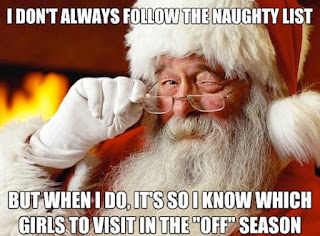 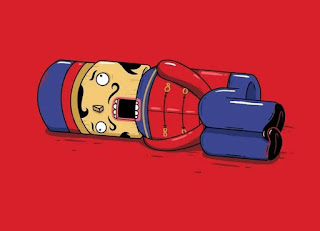 What does Santa suffer from if he gets stuck in a chimney?
Claustrophobia!

Why does Santa have three gardens?
So he can 'ho ho ho'!

Why did Santa go to the doctor?
Because of his bad "elf"!

Why did Santa's helper see the doctor?
Because he had a low "elf" esteem!

What kind of motorbike does Santa ride?
A Holly Davidson!

What do you call a cat in the desert?
Sandy Claws!

What do you call a dog who works for Santa?
Santa Paws!

What do you call Father Christmas in the beach?
Sandy Clause!

What do you get if you cross Santa with a detective?
Santa Clues!

What did the sea Say to Santa?
Nothing! It just waved!

What does Santa do with fat elves?
He sends them to an Elf Farm!

What do you get if you cross Santa with a duck?
A Christmas Quacker!

Who delivers presents to baby sharks at Christmas?
Santa Jaws

What is Santa's favorite place to deliver presents?
Idaho-ho-ho!

Why does Santa go down the chimney on Christmas Eve?
Because it 'soots' him!

What do you call Santa's little helpers?
Subordinate clauses!

What do Santa's little helpers learn at school?
The elf-abet!

What did Santa say to the smoker?
Please don't smoke, it's bad for my elf!

Where does Santa go when he's sick?
To the elf center!

What do you call a bankrupt Santa?
Saint Nickel-less!

What do you get if you cross Father Christmas with a detective?
Santa Clues!

What do you call a man who claps at Christmas?
Santapplause!

Where do elves go to dance?
Christmas Balls!

What do elves eat for breakfast?
Frosted Flakes!

What do you call a frozen elf hanging from the ceiling?
An elfcicle!

What kind of cars do elves like to drive?
A Toy-ota!

Who is the king of Santa's rock and roll helpers?
Elfis! (Thank you, thank you very much!)

What type of Shoes does Santa wear when he travels on a train?
Platforms!

What do you get if Santa goes down the chimney when a fire is lit?
Krisp Kringle!

Who is Santa Claus married to?
Mary Christmas!

How long do a reindeers legs have to be?
Long enough so they can touch the ground!

What do reindeer hang on their Christmas trees?
Horn-aments!

Who is the Music Elf's favorite reindeer?
Dancer!

Which of Santa’s reindeers have to mind their manners most?
Rude-olph!

why don't reindeer like picnics?
Because of all their ant-lures!

What do you get when you cross a deer with rain?
A reindeer!

Where do Santa's reindeer stop for coffee?
Star-bucks

What's worse than Rudolph with a runny nose?
Frosty the snowman with a hot flush!

Did Rudolph go to school?
No. He was Elf-taught!

Why did the Rudolph cross the road?
Because he was tied to the chicken!

What do you call Rudolph with lots of snow in his ears?
Anything you want, he can't hear you!

What did Santa ask Rudolph about the weather?
Is it going to rain dear?!

What happened to the turkey at Christmas?
It got gobbled!

What do you get when you cross a snowman with a vampire?
Frostbite!

What do snowmen wear on their heads?
Ice caps!

How do snowmen get around?
They ride an icicle

When is a boat just like snow?
When its adrift!

What song do you sing at a snowman's birthday party?
Freeze a jolly good fellow!

What did one snowman say to the other?
I couldn't hear them, so I have snow-idea!

Why was the snowman rummaging in the bag of carrots?
He was picking his nose!


Why is winter a snowman's favorite time of year?
It is when a snowman can camouflage!

Where do snowmen keep their money?
In a snowbank!

What do you call a snowman who vacations in the tropics?
A puddle!

What happened when the snowgirl fell out with the snowboy?
She gave him the cold shoulder!

Why are Christmas trees so bad at sewing?
They always drop their needles!

What do fish sing at Christmas time?
Christmas Corals!

What did the Christmas tree say to the ornament?
Quit hanging around!

What do you get when you cross a pine cone and a polar bear?
A fur tree!

Why wouldn't the cat climb the Christmas tree?
It was afraid of the bark.

Why didn't the rope get any Christmas presents?
It was knotty!

How does Good King Wenceslas like his pizzas?
One that's deep pan, crisp and even!

Who hides in the bakery at Christmas?
A mince spy!

What did Adam say on the day before Christmas?
It's Christmas, Eve!

How does Christmas Day end?
With the letter 'Y'!

How many letters are in the angelic alphabet?
The Christmas alphabet has "no EL"!

What carol is heard in the desert?
O camel ye faithful!

What do angry mice send to each other at Christmas?
Cross Mouse Cards!

Why do cats take so long to wrap presents?
They want them to be purr-fect!

What is the best xmas present in the world?
A broken drum, you just can't beat it!

How do sheep in Mexico say Merry Christmas?
Fleece Navidad!

What are the best Christmas sweaters made from?
Fleece Navidad!

How did Scrooge with the football game?
The ghost of Christmas passed!

What athlete is warmest in winter?
A long jumper!

What do you get if you eat Christmas decorations?
Tinsilitis!

What is the worst disease that you get at Christmas?
Excemas!

What's the most popular Christmas wine?
'I don't like Brussels sprouts!'

Why do ghosts live in the fridge?
Because it's cool!

What happened to the man who stole an Advent Calendar?
He got 25 days!

What did the beaver say to the Christmas Tree?
Nice gnawing you!

Why are Christmas Trees like bad knitters? They keep loosing their needles!
What do you get if you cross a Christmas tree with an apple?
A pineapple!

Where does Mistletoe go to become famous?
"Holly" wood!

What's the best thing to put into a Christmas Cake?
Your teeth!

What do you get if you cross a bell with a skunk?
Jingle Smells!

Where would you find chili beans?
At the north pole!

Why is everyone so thirsty at the north pole?
No well, no well!

What do sheep say at Christmas?
Wool-tide Bleatings! or A Merry Christmas to Ewe!

What do you call a bunch of chess players bragging about their games in a hotel lobby?
Chess nuts boasting in an open foyer!

Which football team did the baby Jesus support?
Manger-ster United!

How did Mary & Joseph know how much Jesus weighted when he was born?
There was a weight in a manger!

What do you call a three legged donkey?
A wonky donkey!

What's the name of the one horse in "Jingle Bells"?
Bob. (Bells on Bob's tail ring!)

What is the most competitive season?
Win-ter!

Children: This turkey tastes like an old sofa!
Mom: Well, you asked for something with plenty of stuffing! 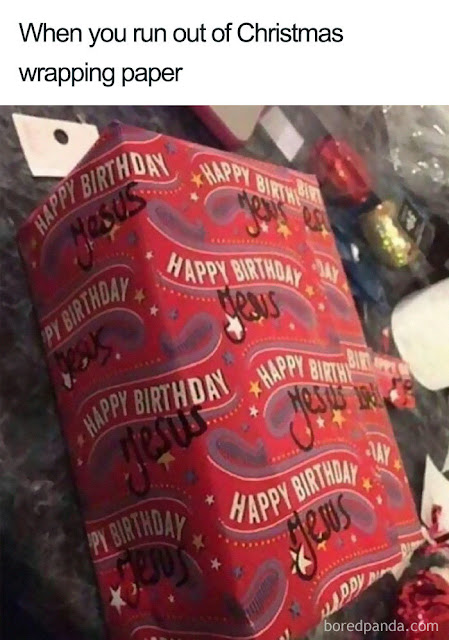 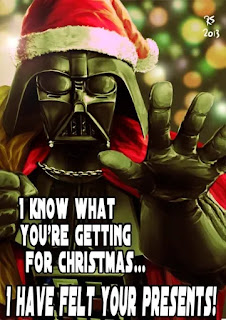 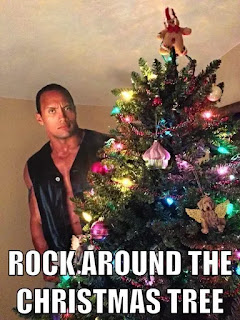 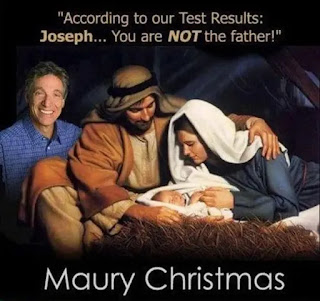 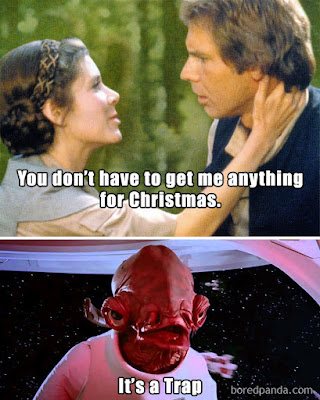 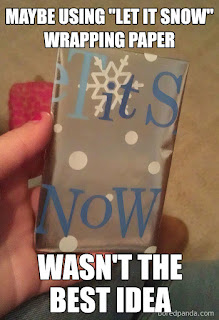 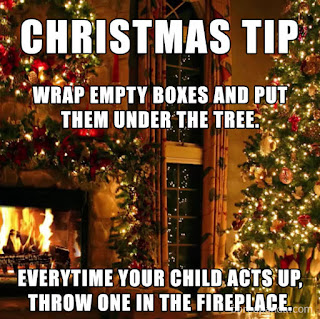 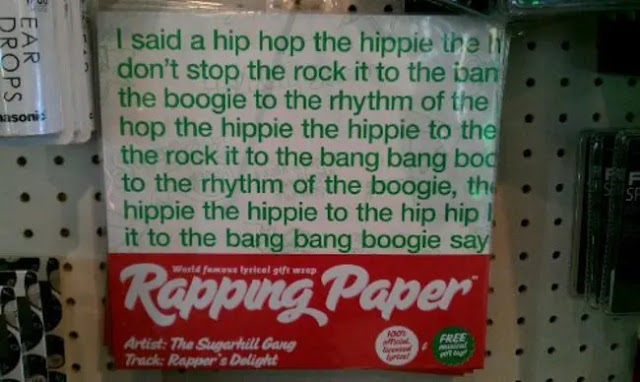 You Know You're In Trouble When...

Your accountant's letter of resignation is postmarked Zurich.

People send your wife sympathy cards on your anniversary.

The plumber floats by on your kitchen table. 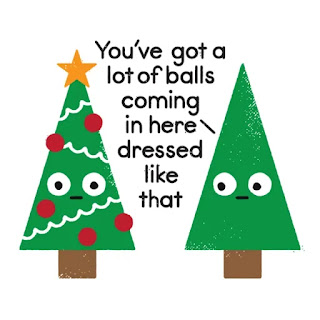 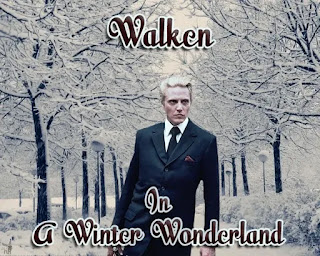 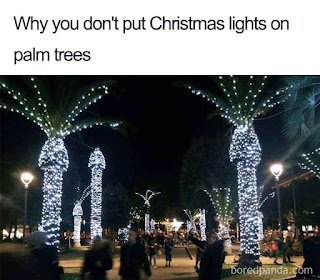 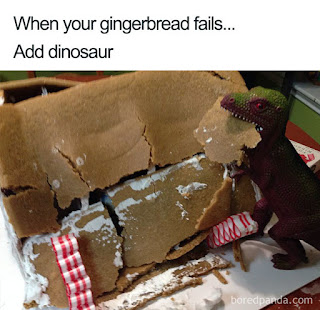 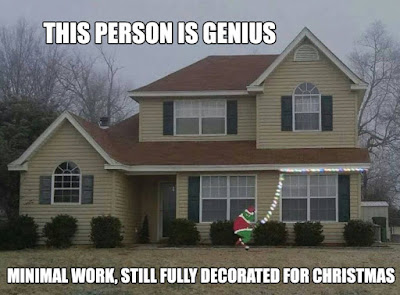 A civil servant is badly hurt, after falling down the stairs at city hall.

He is taken to the hospital where he remains in a coma for several days.

Finally, an eye opens and his doctor tells him, "My friend, I have bad news and I have good news. First of all, you'll never be able to work again."

A young man was a very slow worker and subsequently found it difficult to hold down a job.

After a visit to the employment office, he was offered work at the local zoo.

When he arrived for his first day, the keeper, aware of his reputation, told him to take care of the tortoise section.

Later, the keeper dropped by to see how the young man was doing and found him standing by an empty enclosure with the gate open.

"Where are the tortoises?" he asked.

"I can't believe it," said the new employee, "I just opened the door and whoosh, they were gone!"