I intended a post on our rafting adventures. At this point all I can work up is a few lines about having fun with good friends . OK maybe all I've got is these three lines.

Today I received a major life changing blow and its taking almost everything I've got mentally to cope. For those of you who pray, I can use it. For those of you who don't but are kind enough to care, thanks. I appreciate your friendship. I'll try to work up something when I can get into it.
Posted by Res Ipsa at 6/24/2008 09:58:00 PM No comments: 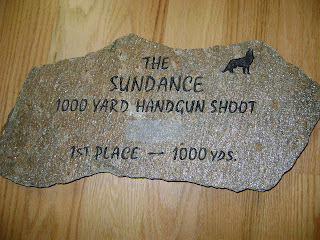 I managed to place 2nd at 750 yards. At 500 yards I nearly earned the nickname of "Monica". I sucked so bad that I managed only one target that qualified for scoring, the rest were goose eggs. Props to Steve "the optics guy". His first rate spotting got me the win in the unlimited class and 2nd in 750 yards.

I want to mention it here first. Bob Baker one of the owners of Freedom Arms had a prototype specialty pistol at the match. This gun rocks! I don't know how much he wants said about it since the gun isn't in final development yet, but I've already started saving my pennies to get one. No they aren't taking orders yet, and won't till they have at least a partial production run. Yes I'm on the list. Yes its that good a gun. My guess is that Bob wasn't just showing off the new toy to gage interest. He was taking lots of notes and getting input on what we want in a gun. I expect that there will be one or two improvements based on the last three days worth of shooting.
Posted by Res Ipsa at 6/14/2008 09:44:00 PM No comments: