Here’s a few hundred head, all bulls, 12 miles outside of Evanston. These were taken last Wednesday as a Uinta County Sheriff had to close the road to allow for the crossing.That’s a site for sore eyes right there… WOW! They think it something like 600 head in all? Talk about a herd!!! 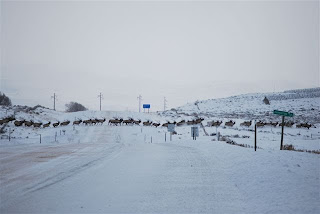 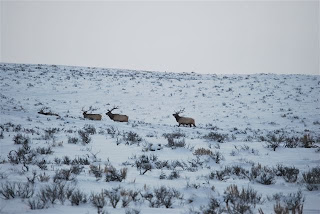 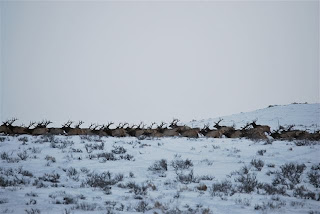 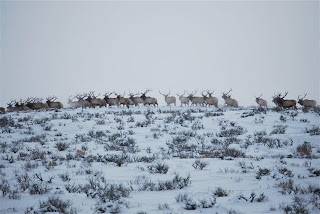 USA Today is running a survey on the Second Amendment.

I think it would be worthwhile if you took it.  It takes all of 2 seconds to complete.  I have no idea if they will publish the results or not.

It's a language that would twist the tongue of even the most sophisticated linguist.

Prairie dogs talk to each other and can describe what different human beings look like, according to scientists.

The species - only found in North America - call out to warn their friends when a predator approaches their habitat.

So the dogs know who is showwing up to shoot them, and they warn each other.

I wondered why they would dive in the holes whenever I show up.  I shoot at the same location most of the time and I thought it was odd that they would take cover when I stopped the truck on a hill that gave me  600 to 1,100 yard shoots, but they would let other trucks drive right up to within 200 to 300 yards.  Now it makes sense.  Pete the Prarie Dog knows that the fat guy in the black truck is bad news no matter how far away he is.  Now I'm going to have to start parking behind the hill and walking up before I start shooting.
Posted by Res Ipsa at 1/24/2011 12:48:00 PM No comments:

This little gem showed up today in my email:

Season 1 was a hit, and Season 2 is on its way. Now it's your turn to take a shot at Season 3! If you are skilled with a pistol, rifle or any other firearm, you could win $100,000 in prizes on the third season of History Channel's electrifying competition show, TOP SHOT. Producers are looking for anyone with unrivaled shooting skills and a big personality to take on exciting physical challenges with multiple guns and mystery projectile weapons.

It doesn't matter if you're a professionally trained shooter or a self-taught, average Joe (or Jane!). As long as you're in good physical shape, have mastered a firearm and can adapt to new weapons and demanding physical situations, you could be America's next "Top Shot."

This season, we're also looking for MARKSMEN PAIRS: Husband/Wife, Father/Son, Co-Workers or Siblings. If you and a close friend or relative are excellent shots, we want to hear from you both! APPLY TODAY!

To apply, email TopShotCasting@gmail.com with your name, city/state, phone number, a recent photo of yourself and a brief explanation of why you should be on the show. Deadline to apply is February 1, 2011. For more information, visit www.pilgrimfilms.tv and click on "CASTING" or call 818-478-4570 for more information TODAY!

* Applicants must be at least 21 years of age, a resident or citizen of the United States and reasonably proficient with shooting and marksmanship

The email came with an official entry form and a personal note asking me to try out.  Unfortunately I can't do it.  I don't have either the time or money this year.  In fact I'm probably going to have to tell my sponsor that I won't be able to honor my commitment to attend the minimum number of shooting matches I agreed to last spring.  Hows that for a kick in the pants?  I finally get a financial backer for my hobbies and the very first year I'm supposed to shoot, at least partially on someone else's dime, and I have to give notice of intent to break my contract.   Maybe next year.
Posted by Res Ipsa at 1/18/2011 10:22:00 PM No comments:

The days are getting longer.

Here in the northern hemisphere the length of day light available each day is increasing, which means that I can almost get home from work before night fall.  It also means that we only have about 6 more weeks of cold winter followed by another 6 weeks of bad sledding and then we'll be able to plant the garden.  Of course I would have guessed that spring is on the way with out seeing the much welcomed extra daylight, because the garden seed catalogs have started arriving at the rate of about 3 a day for the last week.

I think we are going to try to introduce some apple trees to our yard this year.  They are supposed to do well in our cold zone.  Mrs Ipsa has high hopes and I hope she is vindicated for the effort.  She wishes she had planted them 10 years ago, but she had hopes of moving and didn't want to make the effort.  No doubt if we plant them and they do well we'll move 2 weeks before the first crop comes in.  Oh well its fun to try different plants and see how they turn out.
Posted by Res Ipsa at 1/18/2011 10:13:00 PM No comments:

Christmas has come and gone.  We are still picking through the aftermath of gifts, and grandma apparently has some more packages coming this week that she forgot to send last week but the tree is down.  The lights are put up.  I just transferred money from the Christmas fund to the checking account to pay off the wife's credit card.  There are a few gifts left to return but I say again, the tree is down.

I think this was the best Christmas ever.  Not because of material things, although the gifts given and received were great.  Not because of my personal career situation, that is still circling the crapper.  The wife still has to work part time, which after more than 20 yrs in the work force has her a bit ticked.  I got a pre-holiday poor health test results, gonna have to change my ways, or resolve to not see my grandchildren. (I'm fat and getting old, not a good combination). Even with bad stuff happening to me and my extended family, I can still see how this was a great Christmas.

I enjoyed this year better and more fuller than any I remember.  The kids are still young, 4 and 2.  Res Jr. is totally into opening gifts and Little Miss is just starting to get the hang of it.  Christmas was fun.  I mean deeply enjoyable, down right satisfyingly fun.  From the "that's a big present daddy", to the "I bought that for you mommy" to the box of Luppa brass I received, it was great.

I'll spare you the details of Res Jr's Christmas.  Just envision a Class V Hurricane hitting a landfall of brightly colored presents and you have the general idea, except most hurricanes are a little laid back in comparison.  That and they don't say "cool", "oh wow" and "all right!" with nearly as much enthusiasm.  This was Little Miss's first time to be old enough to get the hang of opening the boxes and being excited about what was inside.  She had several boxes left to open when she ripped into one with a baby doll in it.  She got that doll out and said "baby".  After that she was done opening presents.  She loved that little doll.  She walked it around and fed it from the bottle and said "baby" and "mine baby", a lot.

I don't know how to explain the look in her eye.  She had "her baby", nothing else mattered.  She wouldn't even open the rest of her gifts.  Seriously, this is the kid that just the night before ripped up all the gifts that Res Jr and I had wrapped up for mom.  She had her baby and she knew just what to do.  She's not even potty trained and she was changing the diaper.  Its amazing girls are truly amazing, this motherhood instinct must be genetic.

After much coaxing and after all of Res Jr's gifts were opened and he was eying her stash with a gleam in his eye, we managed to get Little Miss to open another package.  This one had shoes.  Little plastic, high heels with puffy feathers on them.  These have to be the most girlish foo foo shoes ever made.  She almost set the baby down.  Not quite mind you, but almost.  She put her heels on and grabbed baby by the ankle.  She tried to walk, of course she couldn't, but she tried.  She could however remain true to her sex and talk all about it.  SHOES!!! SHOES!!! SHOES!!! BABY!!! SHOES!!!  Pretty much that's all she said for about an hour as she carried the shoes in one hand and dragged the baby by the other.

Eventually she got the other gifts opened including her kitchen set and she seemed to like them.  Girls sure are different than boys.  With my son, I instinctively know what manner of mischief is brewing behind those blue eyes.  With my daughter, I am absolutely clueless.  But its so fascinating to find out what will strike her fancy next or how she will open her heart to one object and receive total gratification from another.
Posted by Res Ipsa at 1/02/2011 10:30:00 PM No comments: