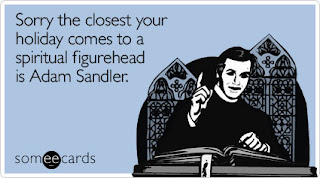 Get out your Adam Sandler CD's.  It's that time of year again.  Newest Version.

Continuing the current trend of large-scale mergers and acquisitions, it was announced today at a press conference that Christmas and Hanukkah will merge. An industry source said that the deal had been in the works for about 1300 years.

While details were not available at press time, it is believed that the overhead cost of having twelve days of Christmas and eight days of Hanukkah was becoming prohibitive for both sides. By combining forces, we're told, the world will be able to enjoy consistently high-quality service during the Fifteen Days of Chrismukah, as the new holiday is being called.

Massive layoffs are expected, with lords a-leaping and maids a-milking being the hardest hit. As part of the conditions of the agreement, the letters on the dreydl, currently in Hebrew, will be replaced by Latin, thus becoming unintelligible to a wider audience.

Also, instead of translating to "A great miracle happened there," the message on the dreydl will be the more generic "Miraculous stuff happens." In exchange, it is believed that Jews will be allowed to use Santa Claus and his vast merchandising resources for buying and delivering their gifts.

One of the sticking points holding up the agreement for at least three hundred years was the question of whether Jewish children could leave milk and cookies for Santa even after having eaten meat for dinner. A breakthrough came last year, when Oreos were finally declared to be Kosher. All sides appeared happy about this.

A spokesman for Christmas, Inc., declined to say whether a takeover of Kwanzaa might not be in the works as well. He merely pointed out that, were it not for the independent existence of Kwanzaa, the merger between Christmas and Chanukah might indeed be seen as an unfair cornering of the holiday market. Fortunately for all concerned, he said, Kwanzaa will help to maintain the competitive balance. He then closed the press conference by leading all present in a rousing rendition of "Oy Vey, All Ye Faithful."

Menachem, a Jewish businessman, warned his son, Moshe, against marrying a non-Jew.

'It doesn't matter,' the old man said. 'A shiksa will cause problems.'

Moshe persisted.  After the wedding, Menachem called the son, who was in business with him, and asked him why he was not at work. 'It's Shabbos,' Moshe replied.

Menachem was surprised, 'But we always work on Saturday. It's our busiest day.'

'I won't work anymore on Saturday,' Moshe insisted, 'because my wife wants us to go to shul on Shabbos.'

'See,' Menachem retorted, 'I told you marrying a non-Jew would cause problems.' 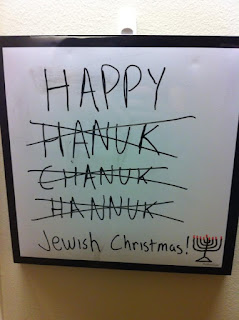